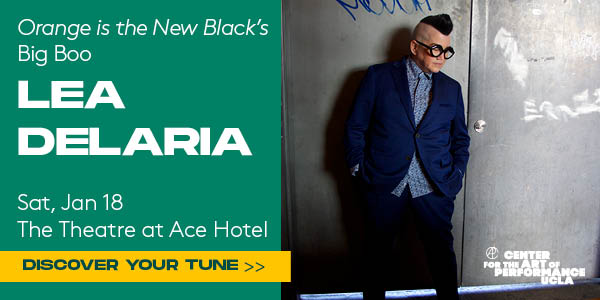 “(Delaria) swings hard, and scats and bends notes in a style that suggests a no-frills Betty Carter on steroids.” —The New York Times

The much-loved and outspoken actress, comedian and gay icon Lea DeLaria seems to have achieved overnight stardom with her three-time SAG Award-winning stand-out role as Carrie “Big Boo” Black in the Netflix hit series Orange is the New Black. However, her multifaceted career has, in fact, spanned decades. An Obie & Theater World Award winner and Drama Desk nominee for her portrayal as Hildy in the Public Theatre’s 2014 revival of On The Town, DeLaria has also appeared in the television series The Code and is the first openly gay comic to perform on television in America. She was also the featured vocalist at the 50th Anniversary of the Newport Jazz Festival, and has performed in some of the most prestigious houses in the world including Carnegie Hall, Lincoln Center, the Chicago Symphony, Hollywood Bowl, The Royal Albert Hall and the Sydney Opera House.

With a performance style described as “loud and brassy,” DeLaria brings her high energy genius to The Theatre at Ace Hotel to perform hits from her latest album House of David: delaria+bowie=jazz. With her velvet-smooth voice contrasting perfectly with a razor-sharp wit and sassy stage presence, DeLaria promises to deliver.

Lea can be seen as ‘Queenie’ in the HULU series Reprisal opposite Abigail Spencer and Rodrigo Santoro.

The event runs from 8:00pm to 10:30pm on the following dates.
Select a date to add this event to your calendar app.