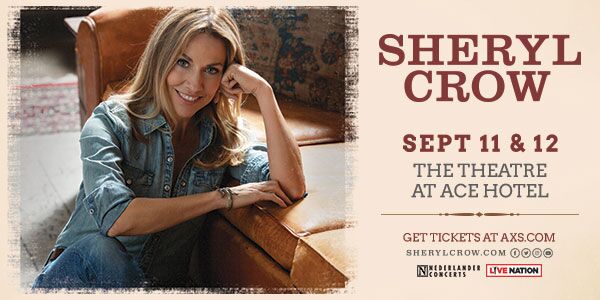 The Theatre at Ace Hotel

Since exploding onto the global stage in 1993 with the multi-platinum Tuesday Night Music Club album, the one-time music teacher and studio vocalist from Kennett, Missouri has forged a career to become the finest female singer/songwriter of her generation. Working at a breakneck pace, the release of each new album led immediately to the road. The next two albums, 1996's Sheryl Crow and 1998's The Globe Sessions allowed her to further hone her musical talent while spawning classic hit songs ("If It Makes You Happy" and "My Favorite Mistake" to name a couple) and earning legions of new fans. She recorded her triumphant 1999 Central Park Concert for Sheryl Crow and Friends: Live from Central Park, which included duets with some of music's true luminaries including Stevie Nicks, Eric Clapton and Chrissie Hynde. The new millennium saw Sheryl's resurgence with 2002's C'mon,C'mon, which featured the summertime smash "Soak up the Sun." In late 2003, Sheryl released her first greatest hits album, The Very Best of Sheryl Crow. The retrospective set included her cover of Cat Steven's classic "The First Cut is the Deepest," and propelled the album's sales to over 5 million copies worldwide. After an extensive international tour, Sheryl took a well-deserved rest, from which came 2005's poignant Wildflower. In early 2006, Sheryl was diagnosed with Stage I breast cancer. The event changed her life, and her recovery has reinforced her zest for a full, joyful life. Over the course of her career, Sheryl has collaborated with everyone from the Rolling Stones to Kid Rock to Willie Nelson. She has won countless awards (including 9 Grammy Awards) and she has sold over 30 million albums worldwide. Sheryl continues writing new music and through her strength and perseverance, she continues to be an inspiration to cancer survivors everywhere.

The event runs from 7:30pm to 10:30pm on the following dates.
Select a date to add this event to your calendar app.